Alex cracked me up tonight during our car ride home from Ama and Akung's house (where we celebrated Clay's 9th birthday! Yep, that adorable 18 month old that some of you got to see walking down the isle in a tux at my wedding is now turning NINE). The girls asked me to sing "Zippity Do Da" to them because they were miffed we didn't read stories before heading home for bedtime, and at the part where it goes, "Everything is satisfactual", Alex helped clarify by saying, "That means everything is OK. Or it's number 3." Then she did the hand gesture for OK that makes an O with your thumb and pointer. Yep, you're right Alex! Number 3!
Posted by avw at 9:45 PM No comments:

We caught some pretty cute and funny footage of the girls during Jack's birthday last week. My favorite part is Dani's assessment of Alex's cake eating abilities.
(I had to condense this down pretty small to be able to upload it, so apologies for the bad sound and picture quality...)

Funny enough, Dani was right!
Posted by avw at 10:55 PM No comments:

I've been lacking in my blogging abilities lately (D@%# facebook), and it feels like the babiest Wei has made so many leaps and bounds (literally! Well, almost) that have not been documented yet. So I'll do my best to be comprehensive. Ben is 10 months old today, and he's a real handful and a real charmer. His smile melts any heart and he has a laugh that I still haven't been able to capture on video - it's even better than that kid laughing to "bling bloong" on YouTube (IMO). :)

Ben can now:
- Stand and let go of what he's holding for about 15 seconds
- Do stairs up and down (often by himself when I accidentally leave the gate open. Where's Ben? Oh, he's just roaming around upstairs by himself.)
- Gesture and grunt to show us what he wants (which he does every 15 seconds...)
- Use sign language to say "Light", "All Done", and "Music".
- Drink water and breast milk (cold! good boy) from a sippy cup which he holds himself. Same for a bottle, although he seems to prefer the cup. (pics below)
- Say "Da" which means Done, Daddy, Ball, and I want that.
- Say "NaNa" which means Banana or other fruit (he says it for pears and peaches too)
- Say "Mama" (Yes, I do love this, except he usually says it when he's upset about being left alone or wants out of his crib so it's not as endearing as it will be when he's the girls' age and says it while running towards me when I enter the room to pick him up from school!)
- Look at books instead of just eating them
- Ride in his new wagon when we go for walks
- Put toys away into a bin when we sing the "Clean Up" song
- Play peek-a-boo by putting a blanket on his own head and then pull it off laughing
- Eat almost any table food you offer him. His favorites are canned green beans, cheerios, banana pieces, asparagus tips, pears, peaches, cheese, scrambled eggs, and noodles (he does an adorable slurping sound to get them into his mouth)

Ben still does not:
- Sleep through the night (this is my fault. I just can't let him cry it out in a consistent way. It makes me sad. I need Jean to be living upstairs again to tell me I'm not torturing my kid while I listen to 1-2 hours of screaming.)

- Understand that the toilet is not a water table. When I set up a water table for him in the playroom a few weeks ago (see pic below), I thought he'd have crazy fun with it considering how much he loves his bath and how many times a day I drag him out of the bathroom kicking and screaming. But it was only fun for a few minutes and then he was on to something else. We'll see if having his sisters around would help - they were at daycare that day.

- Like his carseat much. He'd rather be crawling around. Poor guy - he spends a LOT of his life in there! Between errands with and without his sisters and running them to school 2 days a week, he must see his carseat as a second home. Apparently one he'd like to leave.

It's hard to believe our little man will be 1 year old in a few short months. It makes me feel a little torn about our 4 day trip to Vegas next week... with my luck, he'll start walking at my parents' house and I'll miss his first steps! But I can't say I'm willing to give up 4 whole days with Jack in a kid-free environment. ;) 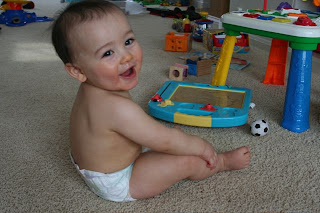 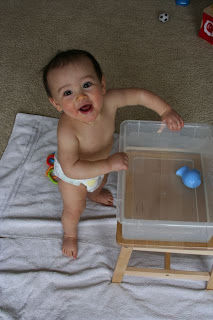 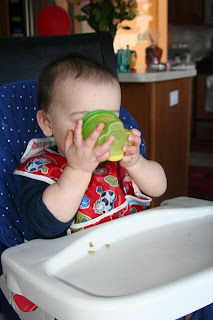 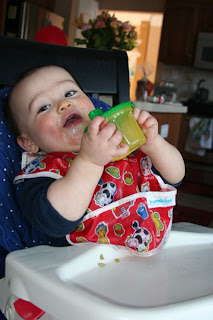 The girls skipped their naps last week, and by dinner they were both pretty out of it.

Alex asked for more green beans and I brought them. She gobbled them up, then looked at her empty bowl and whined to me, "Mommy, you never brought me any green beans."

Dani barely held it together through dinner and was too sleepy to take a bath, so Jack took her up and started getting her ready for bed. He put on her night diaper at which point she woke up, wanting to take a bath. She stood up, looked down at her diaper and asked Jack, "Have I been wearing diapers ALL DAY?!?!"
Posted by avw at 8:47 PM 1 comment: