Been a year almost to the day since I really blogged about the kids and general doings. Spring is here (sort of - snow today? Seriously Indy?) and with it will come a fresh start for the earth. It seems like a good time to continue growing the family story tree that was planted back in 2006 when we were excitedly getting ready for the birth of our glorious girls. They just turned 5 on March 12 and it's becoming scarily evident that we are entering a new phase of their growth - out of toddlerhood and little-kid-land and into school days and the Adventures of DivaDani and AdventurousAlex, two Big Girls on a mission to rule the world. Ben's birthday is in a few weeks, and before our little man turns 3, I wanted to focus on each girl, then do a post on him. Dani and Alex are so different from each other and yet they love each other so much. They both draw like fiends every day, although as you'll find out in a future post, Alex also has another type of art she also loves to make. Dani is an amazingly dedicated drawer and is she so prolific that I can barely keep up with the mounds of papers. Some end up in recycling, but there's one drawing she made for her sister that will get preserved for all time: 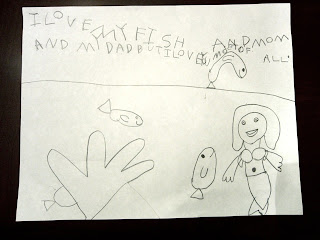 It reads: "I love my fish and Mom and my Dad but I love you most of all."

It brings tears to my eyes, especially when I think about how happy Alex was upon receiving it. She said, "Did Dani draw that Mermaid all by herself?! It's great!" We taped the drawing to Alex's bunk (the bottom, her choice) and someday I'll frame it for her, probably as she goes off to college and endures the biggest separation of her life. Unless of course they go together as many twins do. Ack! I refuse to start thinking about college when the impending doom of KINDERGARTEN is enough to freak me out!!! (FIVE days a week! All day?! When will we have lunch picnics together on the living room floor?!! How will they draw for hours while verbally telling the story while they draw?!!! Breathing into paper bag~~~ Cough. Sigh.)

Dani's drawing style has recently, within the last 4 months, changed a lot. She used to be all about COLOR, as much of it on a page as possible. With as many objects on the page as possible. This is from February of 2010: 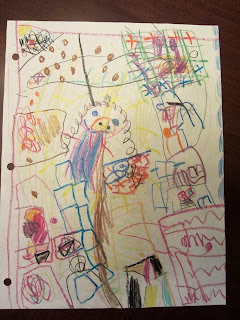 This is from last month. She loves to incorporate words into her pages and really loves making books - pages and pages and pages that we staple together so she can "read" them to us. This one is interesting because it was made the same day as Alex's tear-jerker one and she was doing a "series" of drawing meant to appeal to each family member's favorite things (she drew Lightning McQueen for Ben and asked me how to spell Lightning). So she made a drawing of a book for me! Such a smart girl. 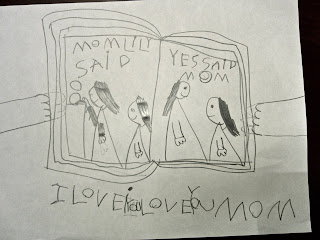 Dani's current obsessions are:
- horses and unicorns
- bagels with cream cheese and jam
- dancing, especially ballet
- her best friend Lily (she and Alex often fight over who gets to marry her)
- rubbing her brother's head (this has been a life long obsession that persists despite my efforts to save him from getting his head popped off)
- making zoos with our plastic animals and clear tubs
- Mulan, Beauty and the Beast, Little Mermaid, and all things Princess
- putting on plays for us (there are rarely intermissions despite the length of the productions...)

She is working on improving her:
- pencil hold (we say "Pineapple" to remind her to switch to the correct grip)
- bicycle riding (she made a big breakthrough a few weeks ago during a fake spring warm day when she made it down the driveway without walking her bike and she didn't stop at each driveway to walk across it. She even picked up a little speed and realized that the bike felt better that way!)
- temper (she is quick to be angry about ANYthing. Many a stubbed toe has provoked her to yell at the item that caused it.)
- ability to talk with grown ups, even family members. (If she doesn't talk with you, don't take it personally. We are working on it.)
- letter and number writing. She recognizes all of them, but many are backwards when she writes them. I hear this is typical of the age.

And very importantly, she is working on learning to READ! Tonight I was prompted to finally sit down and blog after she reached a milestone I just didn't want to forget. Rather than have us read her a bedtime story, she chose to read us a Clifford Learn to Read book called "Who hid it?" start to finish, with very little help. Hooray! Even for her to want to read to us and to not give up after the first few pages is a big breakthrough. She was very proud of herself and we were very very proud of her. When she is determined to do something, watch out world! The doctors at Children's Hospital of Pennsylvania sort of warned us of this character trait before she was even born... As most of you know, when the girls were 18 weeks old in utero, they developed Twin to Twin Transfusion Syndrome and it nearly took them from us. We went to CHOP for laser surgery to correct an imbalance in my placenta that caused Alex to get transfused with a lot of the amniotic fluid and blood that should have been going to Dani. This imbalance caused Dani to have very little fluid in which to move, making her what is called a "stuck baby" because she was plastered close to the walls of her sac. Yet Dr. Johnson, while looking at the ultrasound screen, said, "Well, she is still kicking and moving around and acting like she feels fine. So that's a good sign. She's a fighter." Yes, Dr. Johnson. She is. And will always be. She is one amazing kid and we feel so lucky to have her here with us... (even on days when she is yelling at the dentist who, in her mind, had "put the cavity in there to make me sit longer in this chair!")DeterminedDani. We love her.

A few pictures from the last few months. Dani is very happy her hair has grown long enough for braids - it was a goal. :)

This was the most fought over dress this winter. It says "Let it Snow" and now that spring has arrived, their teacher jokes with them that they shouldn't wear it. She puts a sticker above "Let it Snow" that says "Please don't". 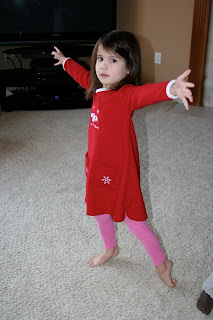 One of hundreds of zoos 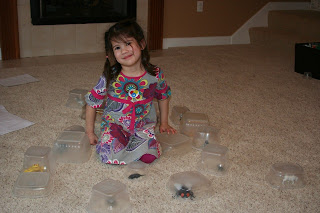 The sisters, in full Glamour Gear. We have been enjoying the Fancy Nancy books, and these accessories arrived just in time thanks to the first "drop off" birthday party they have attended. Thanks, Katie! 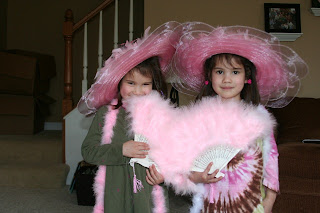 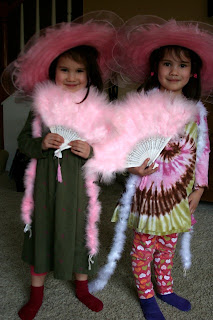 Hi Alyssa!
Glad to be looking at your blog again. The girls are soooo big! Give them hugs for me, Ben too. I miss you all terribly! It was great to see Mikey and Holly the other weekend. We had a wonderful time, but I sure wished you guys could have been there too! I started a blog of my own:
I'd love for you to read and follow! Miss you, love you! Have a wonderful week!
Livie